Our general dentist, Dr. Chris Wilson, has been helping smiles on the faces of Kamloops for years. 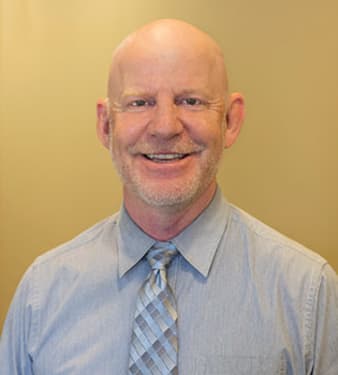 Dr. Wilson is a general dentist who grew up in Kamloops, and was actively involved in minor hockey and skiing, and graduated from Kamloops Senior Secondary School. After high school, he attended the University of British Columbia graduating from the Faculty of Dentistry in 1983. After graduation, he served in the military for four years and has been practicing Family Dentistry in Kamloops since 1987.

Dr. Wilson has always actively pursued new knowledge and skills through dental continuing education. He spent four years studying at the renowned Kois Center in Seattle Washington and graduated in 2012.  The Kois Center is a post-graduate program in risk-based advanced treatment planning and restorative dentistry. Dr. Wilson remains actively involved in the Kois Center mentoring several courses each year and attending the annual Kois Center Symposium in Seattle each summer. You can learn more about the Kois Center principles by clicking here.

Dr. Wilson served on the board of the British Columbia Dental Association from 2011 - 2015 and is also an Associate Fellow of the World Clinical Laser Institute. He has served for many years as the executive of the Kamloops and District Dental Society.

When Dr. Wilson isn't helping smiles at the office, you'll find him spending time with his wife Stefanie and their 5 grown children.

Meet Our Dentists  Meet Our Team

Treat yourself to a brighter smile at Grasslands Dental!